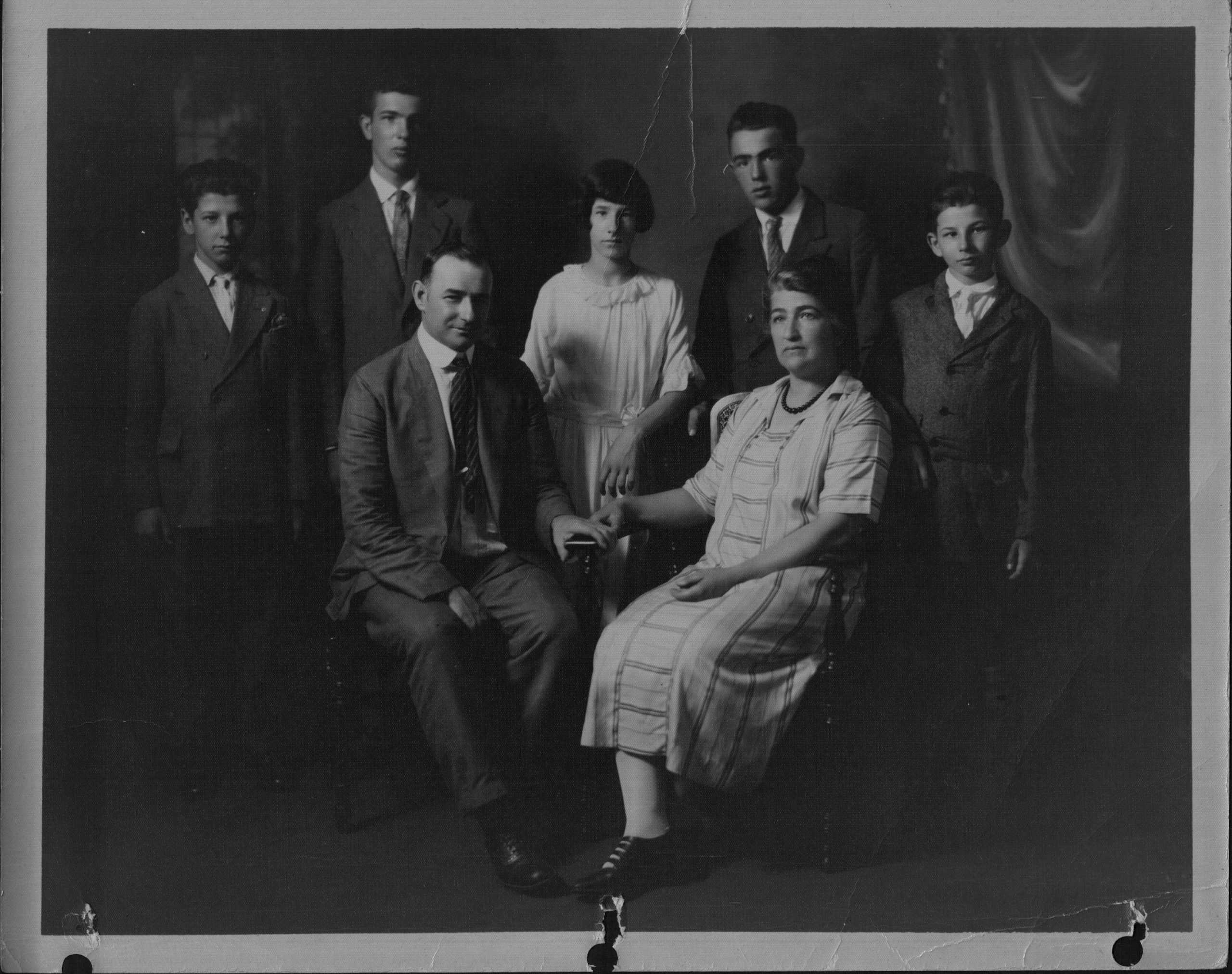 Anna’s parents had moved to America in 1888 and had settled in Albion, R.I. where they ran a dry cleaning business.

Anna was a nun in Canada and left the convent due to health reasons.  She met Emile and they married in 1909 and owned a house in Victoriaville, Canada. They gave birth to five children: Edouard, Edmond, Annette, Paul and Albert.

Together, they emigrated to the United States from Canada in 1914 when Emile was at the age of 30, at the time speaking very little English.  Anna learned and spoke English very well.  Like her mother, Anna was a savvy entrepreneur and Emile was a tin smith by trade.

Sometime after that, Anna and Emile decided to sell their house and move to America. Anna came ahead with Albert who was a baby, and opened, a haberdashery (hat store) or Anna Tessier’s Fabric and Notions, which became Anna Tessier’s Dry Goods store. Emile stayed behind with the other four until 1914.  His daughter Annette tells us that he was a good cook, read to them, loved his children, and nurtured them.

Anna’s business was successful, and eventually she and her husband opened a second store in 1917, Tessier’s General Store on Central Avenue in Pawtucket , R.I.   Around 1925, this store was given to Edouard, to run. Times were hard then, and Edouard would get up very early to get bicycle parts, sell chickens, eggs, popcorn etc. He made arrangements with distributors of merchandise and guaranteed payment, this led him to earn an A-l credit rating Dunn and Brad Street. His store was known to sell “everything from a pin to a plow”.

This year, we celebrate the 100 year mark of Anna and Emile establishing a four generation legacy of Tessier business within the Blackstone Valley of Rhode Island.

Edouard, “Eddie”, used to tell the story of how when he was young he would wash the dishes for one week to get a dime. He would buy paper, and make little shows and games. He would charge his classmates a few pennies to play these games.    Edouard also fixed bicycles, recycling parts to fix other ones, with the money he bought his mother and father their first radio.  It was this enterprising Spirit which helped him to succeed in later business ventures and led him to be called “General Tessier” while proprietor of Tessier’s General Store.

In the early 1940’s, Edouard met his wife Corinne Dulude, when she came in to his store to buy some limestone to paint the rocks in her parents yard.  They shared a love of dancing and often went ballroom dancing. In May of 1942, he was drafted into the Army during World War II. He was in the 45th division and went from No. Africa to Sicily where he was wounded, losing a kidney and suffered nervous shock.  He would tell the story of how the surgeon donated his own blood in order to save him. He recuperated in West Virginia.  Upon his return home he married Corinne.

Edouard had a witty sense of humor. He loved boating and fishing, puttering, and fixing things, he had a “gift of gab” and was often consulted for his advice by his family and customers. He liked to play the violin, played ping-pong, and did ballroom and Cossack dancing.

Throughout the years Corinne demonstrated her creativity through flower arranging cooking, interior decorating, and gardening.  She also was proprietor of Tessier’s Gift Shoppe – a store which sold colonial reproductions within the walls of Tessier’s General Store. Edouard and Corinne lived in Pawtucket, R.I. and gave birth to four children: Janice, Edward, Elaine, and Denise.

Later Anna and Emile decided to run a restaurant called the Kozy Nook, in Rehoboth, Mass. This was later run by their son Edmond and his wife Doris.

In 1954, Emile died of a coronary. On Easter Sunday, April 1955 Anna went to look at summer cottages with her son Edouard, his wife Corinne Dulude, and his four children Janice, Edward, Elaine and Denise.  She fell in love with one on the Kickamuit River in Bristol, R.L. She wanted to buy it as a family gathering place. She died peacefully of a heart attack that night. Edouard bought the house where the family remembered her fondly and gathered often.

Edward received a Bachelor of Arts from Providence College in Business, he also played on their basketball team, He became the owner of Tessier’s General Store in 1972 where he has developed and expanded it to be a successful hardware store.  It has now come to be known as Tessier’s Paint and Hardware, where Edward is joined in day to day operations by his two sons Ed and Eric.

Almost one hundred years later, Tessier’s Paint & Hardware still stands in the same building after a few additions and updates over the years, employing about 10 people.  If you look closely at the ceiling and walls, the original tin ceiling and walls are a reminder of the past and an amazing feat hand crafted by Emile’s hands himself. 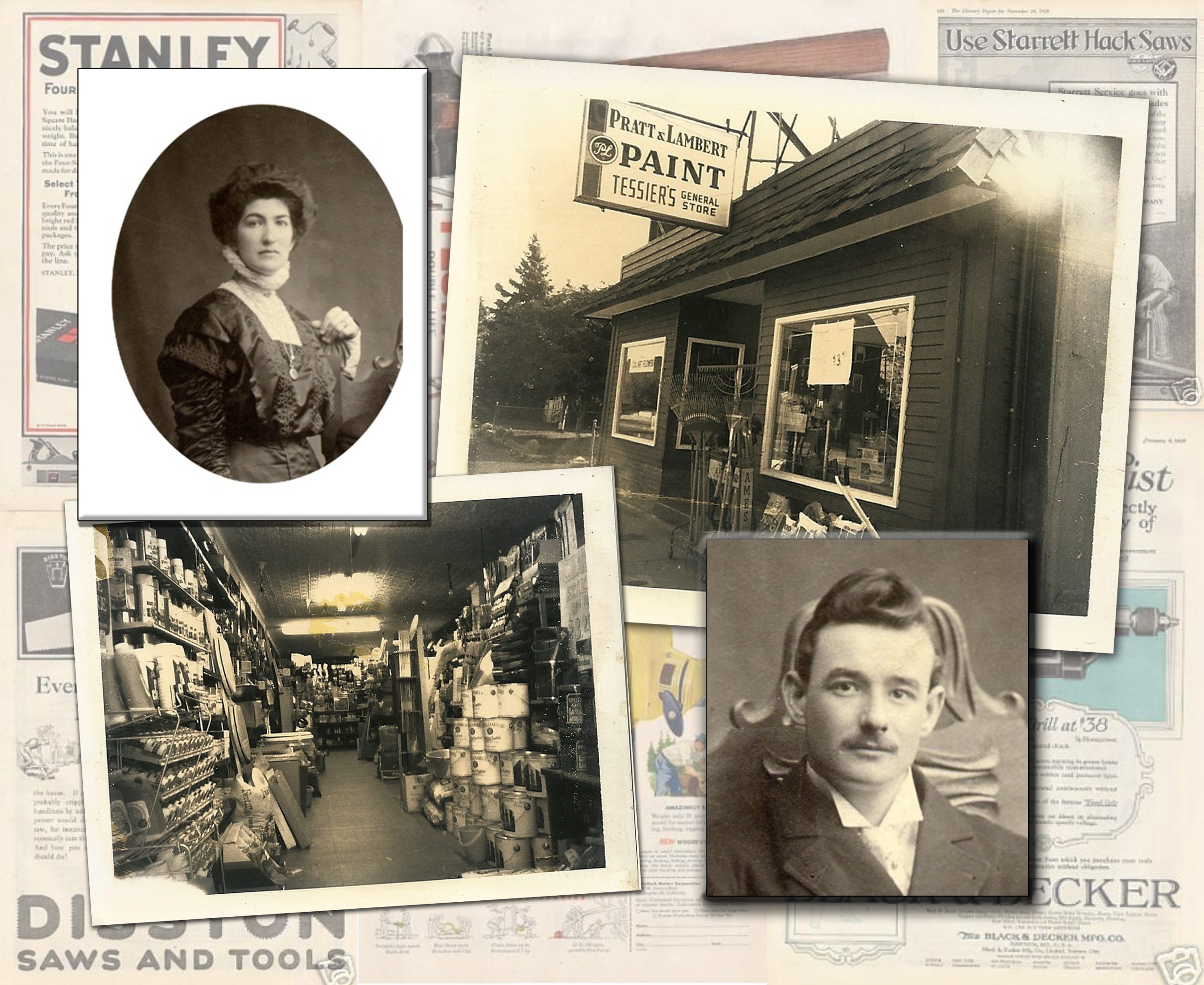 The remarkable growth and transitions over time by Tessier’s Paint & Hardware can be attributed to the company treating its customers as friends and always making them number one. We believe that the business was founded on the principle of buying economically and we give our customers what they want, high-grade hardware at a price everyone can afford.

Tessier’s Paint & Hardware never lost track of where it started, and today it still remains “all in the family” with 3 family members currently employed, including the fourth generation. 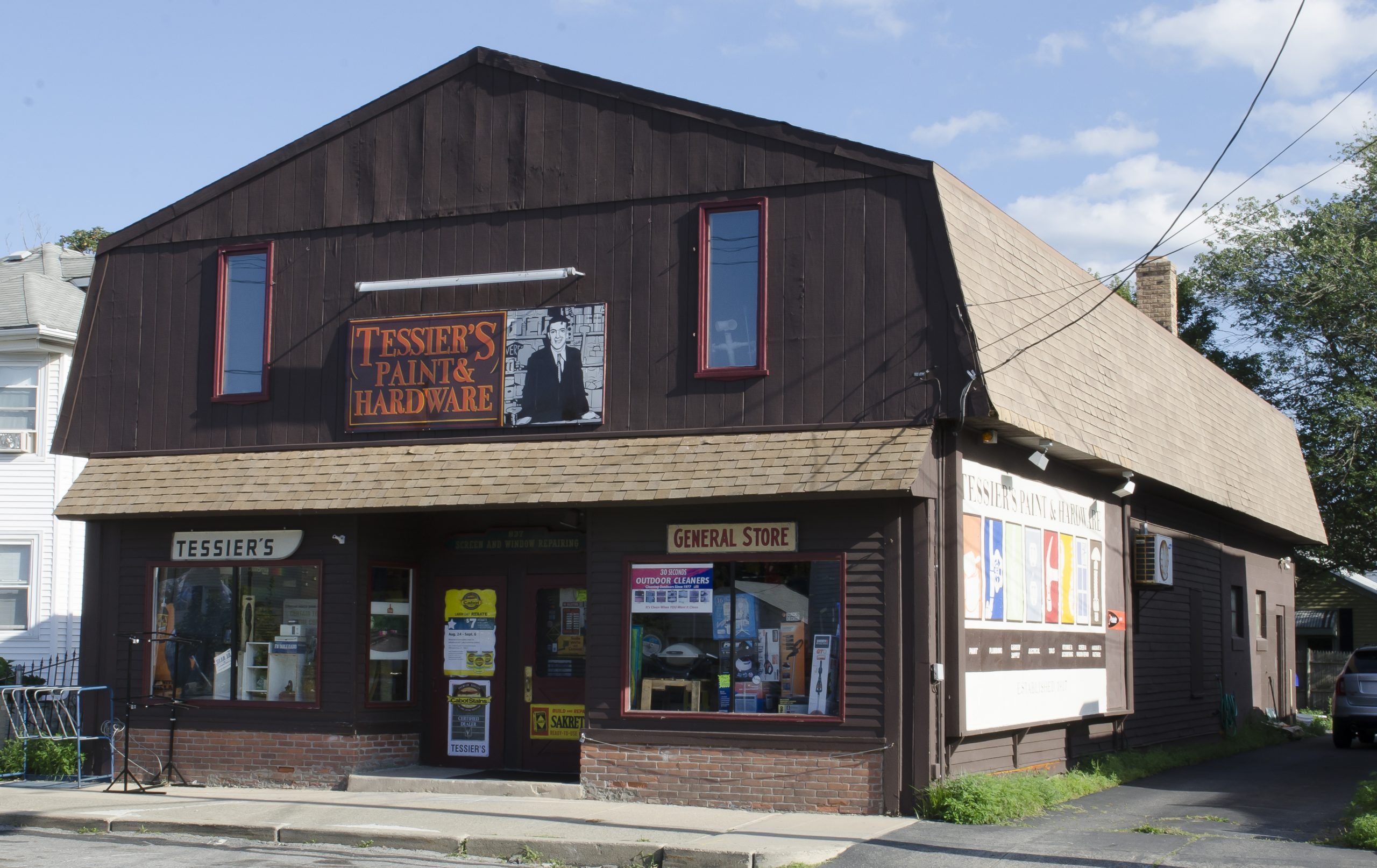 Tessier’s expanded it’s local offerings in 2017 to also be the community’s local Home Brewing and Wine Making Supply shop, one of 3 in the state of RI.